Brands and retailers are empowering girls like never before, and it’s more than just words. 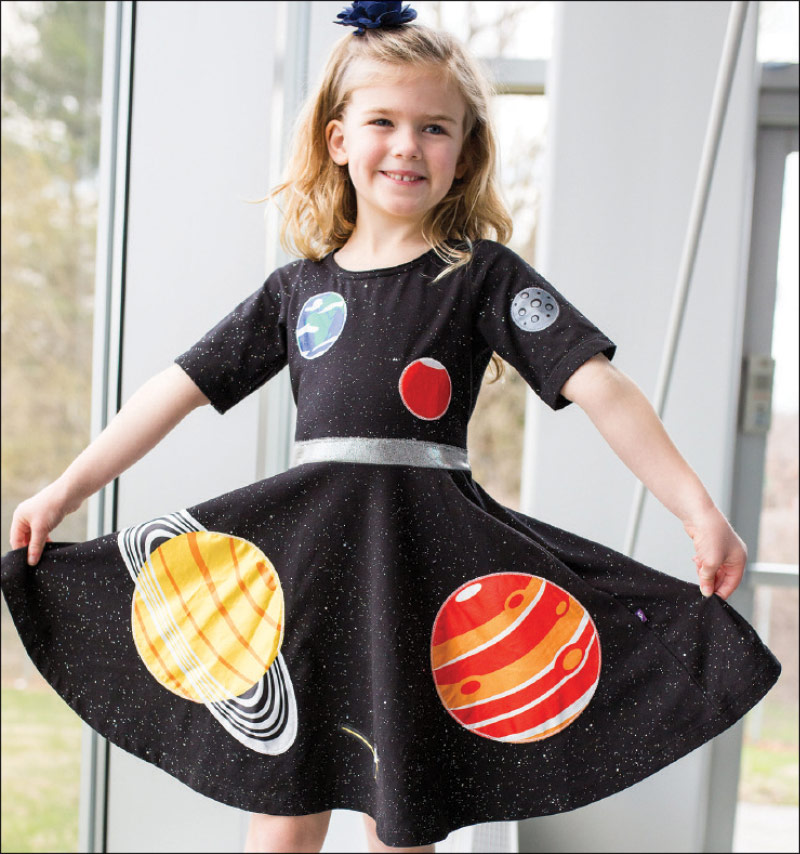 Girl power is much more than just a hashtag. This rising movement to make girls strong, empowered and heard is as nuanced, complex and diverse as the gender it serves. Brands, retailers, celebrities, moms and kids have all leaned into this, lifting girls up with respect, support and inspiration.

The first place to start, agree brands and retailers, is stomping out stereotypes. While it’s certainly okay for girls to be girly, there’s a yearning for a broader definition. Frustrated by the fact that girls get unicorns and princesses while boys often get “whiz kid” and “genius”-themed apparel, many moms have created their own lines.

“I don’t mind my daughter wearing blue and green [versus pink], but I feared she’d believe that science-related topics were only for boys,” says Emilee Palomino, who founded Smarty Girl legging brand in 2016 with trucks, airplanes and robots printed on girls’ leggings, not to mention its sold-out chemistry print. “Gender stereotypes discouraging girls from being brave, curious and scientifically-minded are in nearly all kids’ products, perpetuating the underrepresentation of women in STEM. They need to know STEM is for them!”

The irony is that girls score as well as boys in math and are more likely to graduate and enroll in college, so such gender-neutral prints and empowerment efforts are welcomed with open arms. “I know these say no restock, but I really, really hope [the chemistry leggings] come back,” one mom wrote on Smarty Girls’ website. “My husband is a chemist, and we would love to have them for our three-year-old girl!” 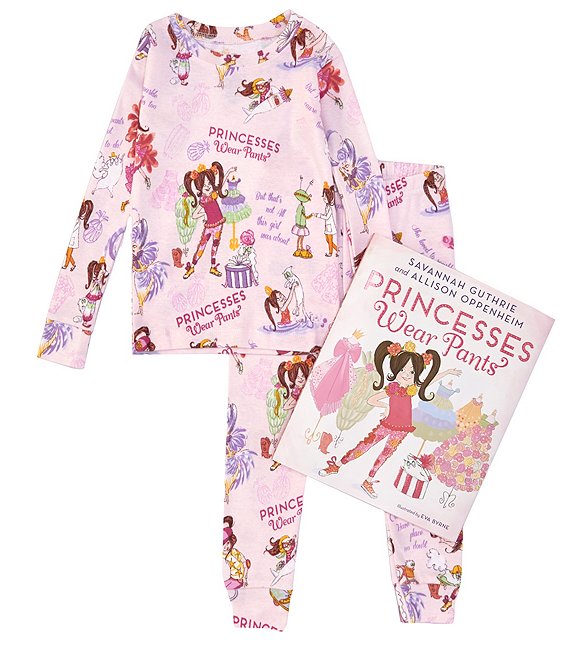 Princess Awesome is another brand shattering stereotypes, featuring “boyish” prints on dresses. “Space and dinosaur prints tend to be bestsellers, and around Pi Day, our community really gets excited about math,” says Founder Rebecca Melsky. Meanwhile, Hatley’s Books to Bed division, which pairs and sells beloved books with matching pajamas, has had great success with its pink Princess Wears Pants style. (The book was written by “Today” show anchor Savannah Guthrie.)

Couture Kids doesn’t see this as a fleeting fad either. “Keeping a positive girl power movement is crucial in today’s times, and it’s something we strive for through social media, in-store and online,” he says. “It’s important to keep girls motivated that they can do anything they want to!”

While there’s heightened emphasis on gender neutrality and equality, the movement isn’t trying to erase girls from the equation. In fact, many stress that while girls can embrace traditional “boy” pursuits in the classroom or on the field, it’s still okay to be girly…should that be their choice. 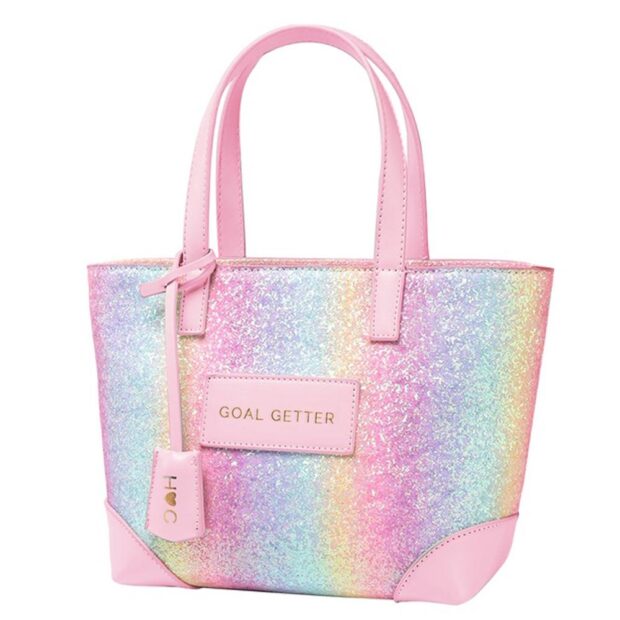 Henny and Coco, for example, features two mini “business” tote bags for girls—Future CEO and Goal Getter—one in solid black, the other pastel rainbow. “These styles are great sellers for us, and we get a lot of positive feedback from our customers, many who confidently rock the purses on their Instagram,” says Lauren Rice Haney, account and operations manager for Henny and Coco. “Our goal is to inspire and celebrate young girls, who are our future, with these positive and empowering statements.”

Defying expectations is trickling over into the boys’ realm too. Boys have long had clothing options empowering them to be adventurous and courageous risk-takers, but modern messaging encourages boys to be kind, caring and respectful. Free To Be Kids makes great tees about/for boys with saying like “Boys Will Be Boys” with the second Boys crossed out to read “Good Humans.” Princess Awesome launched Boy Wonder in Fall 2019, where boys can find monsters as easily as unicorns to express themselves…or coordinate with their sisters.

Having female role models is key for girls, and history has no shortage of them. Clothes Pony & Dandelion Toys boutique in Fort Collins, CO, sells Trailblazer tees from Piccolina and Free To Be Kids tops featuring pictures and positive words about girls/women. 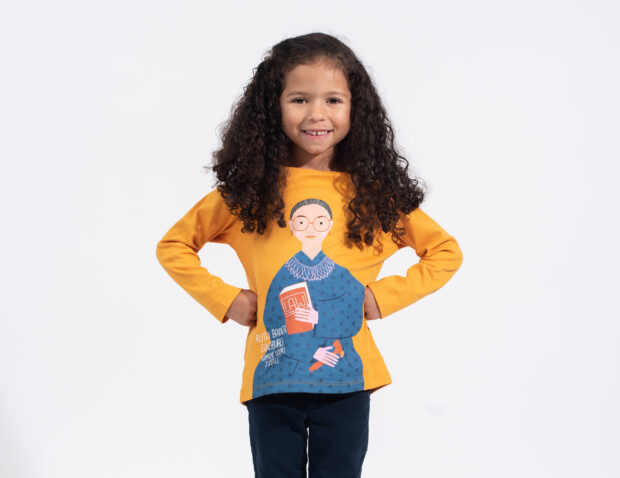 “We also sell a great deal of books empowering to girls and focusing on girls being proactive and active agents driving the plots, as well as non-fiction books about women who have made a difference,” says co-owner Becca Bramhall. “We also host some local authors in our store who write books about complex girls, or girls in different contexts than we are used to seeing.” 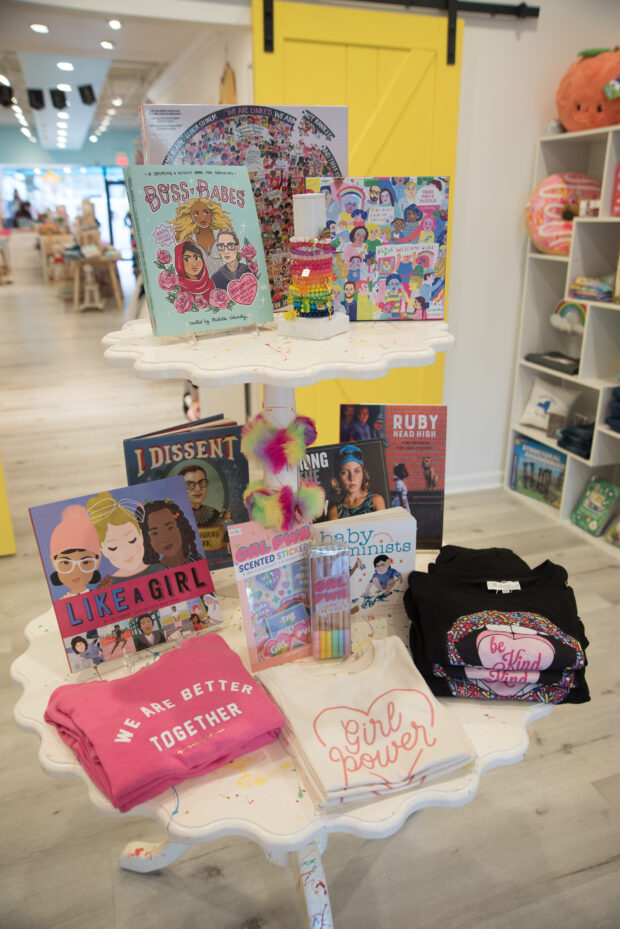 Retailer All Together Now highlights Girl Power in tees and books

Ruth Bader Ginsburg and Amelia Earhart are the top two Trailblazers in the Piccolina series, and the brand is also introducing more relevant figures for Black History Month as well as athletes for the Tokyo 2020 Olympics. It all inspires a “dream big” spirit, one that is carrying over into this election year, which, incidentally, is the 100th anniversary of women gaining the right to vote. Moms are particularly attuned to teaching the legacy of women’s suffrage and importance of voting, and many will bring their daughters with them to the ballot box. There’s also the possibility of the first female president, as Free to Be Kids’ “Forget Princess, Call Me President” shirt implies. 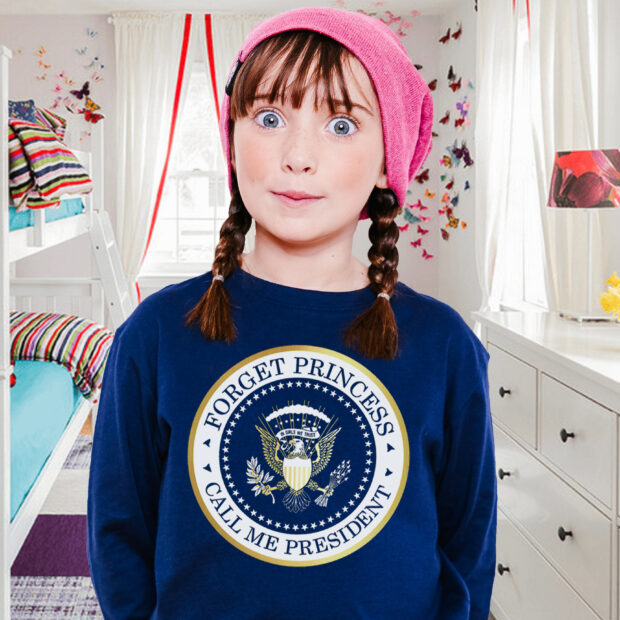 Free to Be Kids

Love Bubby, which makes coordinating Mommy and Me tees (Vote for moms and Vote for Me for daughters), has also partnered with Rey to Z for a feminist collection in time for International Women’s Day. The collab features Love Bubby’s best sellers (“Little Feminist” for toddler and “Feminist” for moms) printed on Rey to Z’s classic hats.

Just as girls are diverse, so should be the items marketed to them. To better reflect our culture, Mattel launched a gender-inclusive doll last year called Creatable World that lets kids be kids…and dolls be dolls. The customizable characters feature extensive wardrobe options, accessories and wigs, so kids can style the doll with short or long hair, or in a skirt, pants or both. 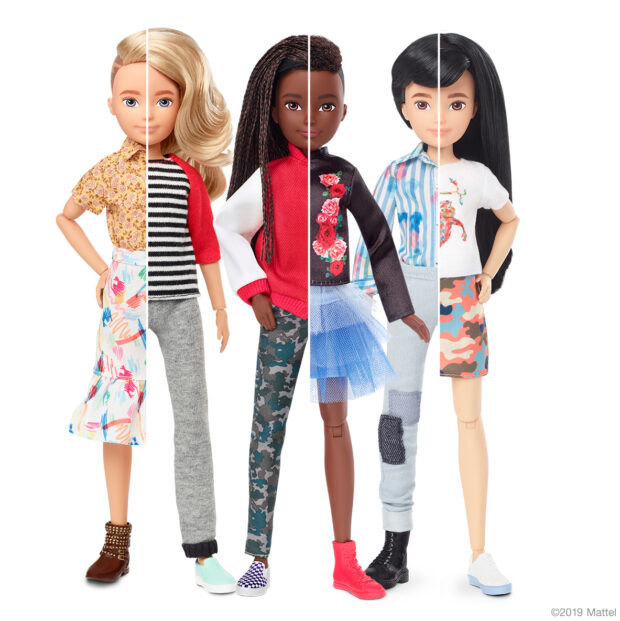 “Toys are a reflection of culture and as the world continues to celebrate the positive impact of inclusivity, we felt it was time to create a doll line free of labels,” says Kim Culmone, senior vice president of Mattel Fashion Doll Design. “We’re hopeful Creatable World will encourage people to think more broadly about how all kids can benefit from doll play.” Meanwhile, Barbie’s “If You Can Dream It, You Can Be It” campaign added six Fashionista dolls (including two male dolls) to the already strong narrative around celebrating individuality.

The Charmsters, an animated short and extensive accessories/doll line in development, aims for inclusivity on multicultural and intellectual levels. The six characters—Entrepreneur Ella, Architect Aaliyah, Coder Cora, Reporter Rita, Blogger Bailey and Innovator Ivy—are as diverse as they come, with STEAM-based skills ranging from building businesses to coding. 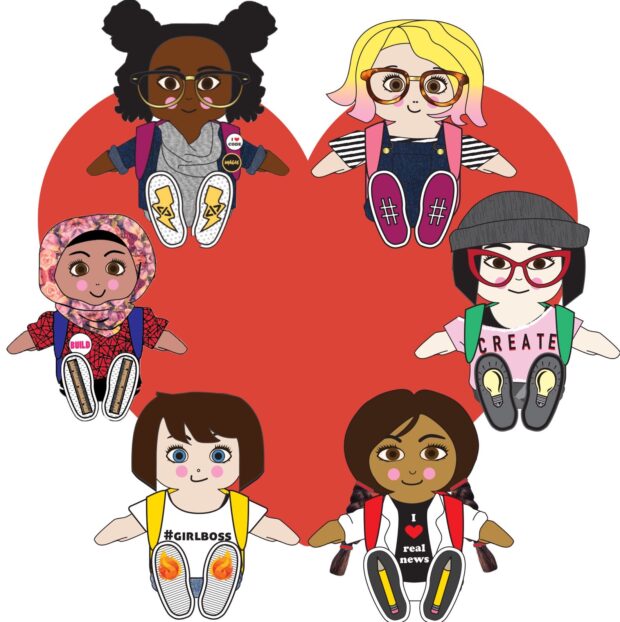 The concept was created by Emily Blumenthal, founder of Handbag Designer 101, The Handbag Awards and children’s entrepreneurial Instagram site @savvysuzanna. Calling itself “the paper dolls of the next generation,” the patented Charmsters have 3-D dimensional mix-and-match clothing and accessories. Girls can collect them to assemble a squad to play with and/or hang them on their backpacks as charms.

When Blumenthal tested The Charmsters, she received an overwhelming response. “From African-African moms, Asian moms and moms with family who wear hijabs all wrote me thank-yous saying how much it meant to see themselves (and more so their daughters) in such a positive and collaborative light,” she says. “As a parent of a tween and a toddler, it’s frankly disappointing that diversity and inclusivity aren’t core values, but to launch a brand in 2020, they have to be.”

The key, however, is authenticity. “Kids can sniff out a marketing ploy,” stresses Blumenthal, who lives in downtown New York. “From where I grew up and where I’m raising my kids, The Charmsters is representative of what is real in the community.”

Greenwich, CT children’s and gift store Splurge has made it a mission to work with girls in the community, be it by hosting business presentations with the Girl Scouts, Store Owner for a Day mock internships, or modeling contests where contestants  also submit an essay on an act of kindness they did for the community. 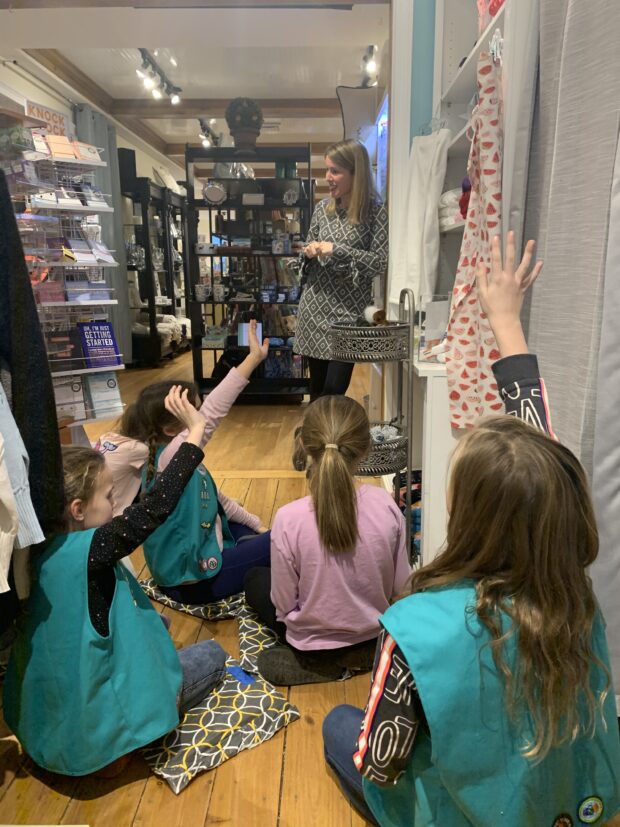 “I have lots of cute tees that say meaningful things like The Future is Female. But to me, kindness is a really strong element of girl power,” says Splurge owner Sonia Malloy. For its Stylista contest, winners had their kindness act printed alongside their modeling session in the store’s back-to-school look book. “This contest focuses on inner beauty and personality, along with personal style, and our goal is to highlight girls who are ‘kindness leaders’ and exhibit the Splurge spirit of giving.”

The winners, ages 8 through 10, exhibited kindness from making and selling bracelets for the Breast Cancer Alliance to throwing out trash in parks to collecting character Band-Aids for hospital-bound kids. The contest, which was photographed by an 18-year-old female film student, was such a hit that Splurge plans to make it an annual event.

South Orange, NJ retailer MOD Studio partners with local organizations on fundraising/product drives. Partnering with Girls Helping Girls Period, MOD will host a “Girl Talk” event, collecting feminine hygiene product donations in exchange for girls attending the pediatrician-led presentation. “Puberty, Periods, and All the Stuff that is Too Awkward to Talk to Your Parents About” will offer a comfortable space for girls to get information and ask questions about their changing bodies.

Another way of evoking girl power is teaching girls to look beyond themselves. Having empathy and using their power to support others less fortunate, can be very empowering. Clothes Pony & Dandelion Toys sells Heart for Hearts dolls which represent real girls from around the world and have a component that gives money back to non-profits that empower girls. For 17 years, they’ve hosted in-store singalongs, asking for a $2 donation to a local non-profit for low income families.

Kids clothing line Cheeni, created by female artisans around the world,  communicates this message on social media and tags. Cheeni includes note cards in shipments to explain the significance of their order and gratitude for supporting the mission. Smarty Girls donates leggings to girls in India as a way of saying they care.

“While clothing can only do so much to empower and uplift,” says Palomino, “I hope the girls knew a person on the other side of the world cares about them.” •