Children’s designers go the limit to appease parents who demand style without restrictions.

From reversible coats and shape-shifting bags to short boots with knee-high attachments, fashion designers across the adult and children’s markets are working to transform styling from one-trick ponies to multi-featured masterpieces. Stemming from the athleisure movement, industry experts agree this desire for comfort-driven, versatility has grown beyond a trend—it’s a lifestyle.

“Today’s shoes do everything—especially in the kids’ market,” says Naly Lee, design director at Vida Group Intl., makers of Stride Rite, Carter’s and Jambu KD, among other labels. “Parents used to buy a casual shoe, a dress shoe and a sneaker, but now the athleisure movement has blurred those lines.” Besides athleisure’s “addictive comfort,” Lee says versatile product is beloved by Mom as a way to stretch the dollar when it comes to keeping up with growing feet. “It’s about making a shoe that does it all,” she says, adding how that typically means “a casual style with slightly athletic influences.”

Sammy Esquenazi, owner of Josmo Shoes, makers of Nanette Lepore, Kensie Girl and Joseph Allen brands among others, agrees that athletic-casual is the most profitable direction for Fall ’18. “If the customer doesn’t want a flat, doesn’t want a boot, doesn’t want a sandal or a dress shoe—what can we give them?” he says. The answer: more “cool sneakers” with unique soles, metallic accents, pompoms and knits across its portfolio.

“We’re still seeing a strong influence for knitted materials as they give a more dimensional look while being monochromatic,” Lee says, mentioning the new “Rowan” style from Jambu KD as a machine-washable casual silhouette with a custom knitted upper and quick closure for kids on the move. “Millennial pinks and neutrals are also a big emphasis for this season,” she adds.

Gina LaRossa, director of marketing for Primigi USA, agrees that cozy neutrals like gray, burgundy, taupe, blush and navy make up the season’s palette, evident across the brand’s fur accessories that can be added and removed for 2-in-1 hybrid fashion sneakers and demi boots. “Kids want trendy, mainstream styles,” she says. “But at the same time, parents want quality that lasts and versatility.”

To that end, Jenevieve Froncek, Pediped’s vice president of product development and design, believes it’s important to never sacrifice quality. “Our customers prove to us, time and time again, that the surface hand-feel and soft linings are what drives their purchase,” she says. For Fall ’18, Pediped is introducing a crib slipper category with its first style, “Buddy,” made from a soft, color-blocked fleece material that can be worn indoors or outside. “No need to change shoes when a quick errand pops up,” Froncek says, highlighting how versatility now trickles all the way down to infant sizes. In addition to parent-pleasing versatility, she says the looks must appeal to kids. “While kids benefit from quality, versatility and comfort, their main desire is often how much the shoe sparkles,” Froncek says, noting that Pediped will continue to release best-selling metallic and glitter embellishments for Fall ’18. The brand will also tap into the growing Mommy and Me movement, introducing a sophisticated palette featuring deeper mauve hues as well as a washed-out navy. “We’re finding it particularly important to pull inspiration from what’s going on in the adult footwear world,” Froncek says.

Bob Campbell, chairman and CEO of BBC Intl., makers of Polo Ralph Lauren, Feiyue and Marvel brands among a host of other licenses, agrees that “concurrent trend release” in adult and kids’ is the formula for success these days. “Seven to 10 years ago, the philosophy was wait and see if the trend will work in adults before taking it down to kids,” he says. “Now that is an outdated model.” Anticipating a close reflection of adult styles for Fall ’18, Campbell cites chunky outsoles, jersey knits, chromes, grommets, appliqués, winter florals, mismatched pairs, retro influences and short boots as some of the season’s key trends.

Kids of all ages are just much more aware of the latest trends and brands, thanks to social media. Many have their own smartphone in elementary school, thus are dialed in on what bloggers and influencers are touting. “It’s turned into a buy now, wear now mentality often because an influencer is wearing it,” Lee says.

Peter Roccamo, vice president of sales and design at BCNY Intl./Synclaire Brands, whose portfolio includes Kenneth Cole, Frye and Stuart Weitzman among others, is not surprised the short boot continues to be strong—like it has been in adult sizes. “The short boot is one of the few styles with the ability to cut into the athleisure business,” he says. “It’s becoming a staple in a lot of kids’ closets.” Roccamo says the style’s versatility, particularly for between seasons, is what caused the short boot to kick the ballet flat from the center of girls’ fashion. “For years, every girl had a ballet flat, and now they’re using a short boot as their everyday shoe,” he says.

Josmo’s Esquenazi says it’s still important to keep a few tall boots on the roster, as well. “We have it all covered,” he says. “Last year, people wanted the tall shaft, even though most preferred the Chelsea boot.” For Fall ’18, Esquenazi says the company is updating several boot offerings with heavy embroidery details, tapping into the tapestry trend that’s been prevalent in adult sizes the past few seasons.

As comfort and wellness continue to be strong themes, Vida’s Lee believes parents also want features such as memory foam insoles, anti-microbial-treated linings and (at least) water-resistant uppers. Non-slip soles, sturdy constructions and lightweight materials are other key product aspects. Jambu KD, for example, is launching two mid-height waterproof boots for Fall ’18 with the same protection as a classic rain boot yet more suitable for play. The two new styles, “Willow” and “Cypress,” offer lightweight EVA construction on a full rubber sole for a sleek and functional silhouette that holds up in muddy terrain. “If you look at slush-molded boots or more heavy-duty boots, it’s really difficult for a kid to wear all day long and still play,” Lee says. “Even when I wear bulky waterproof boots as an adult, I’m clunking around and can’t wait to take them off.”

Another principal concern of today’s parent that must be met: ease of care. “With shoes going from playground to party, it’s important Mom can easily wash them and be ready for the next day’s adventures,” Lee says, noting its Stride Rite line will include its first machine-washable lighted program in its Made2Play platform. The M2P Lighted Neo features a translucent sole with flashing lights and a minimal lifestyle sneaker upper. “A lot of competitors are trying to figure out what more they can do with lighted shoes, so this machine-washable technology is a big story for us,” she says. The lighted offerings are available in black and navy for boys with pops of bright colors on the outsoles, as well as blue, pink, gray and aqua for girls. “I must say, children do not dress the way children used to 20 years ago—they are way cooler today,” Lee says. 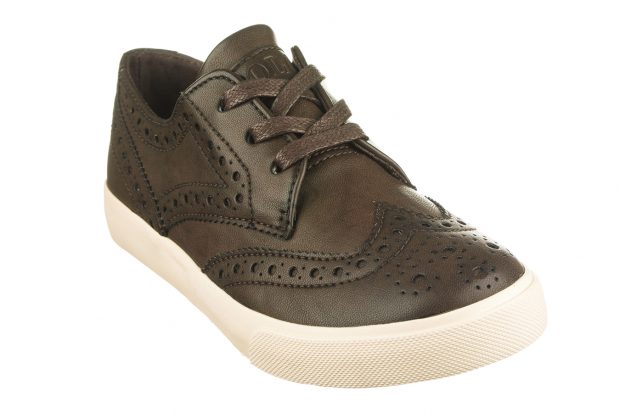 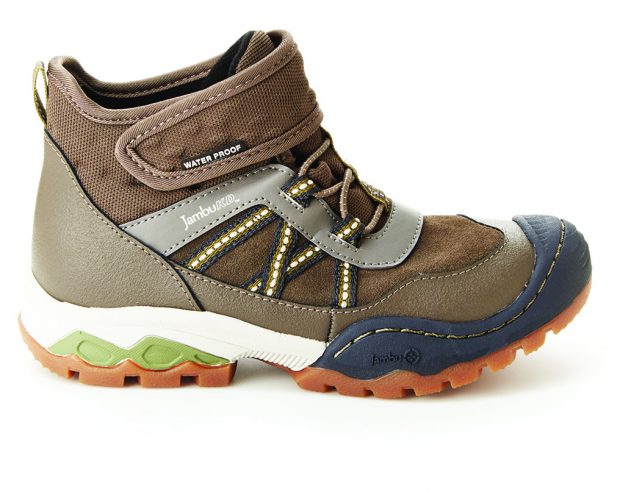 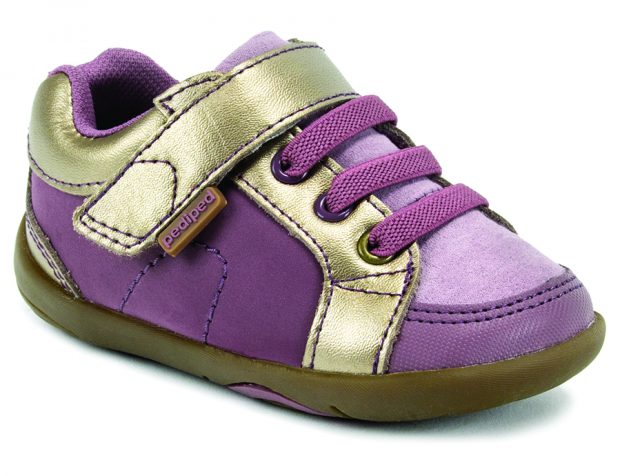 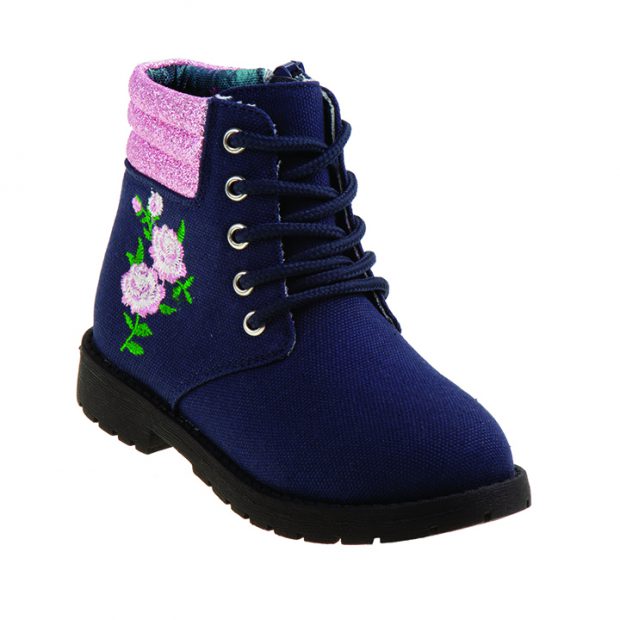 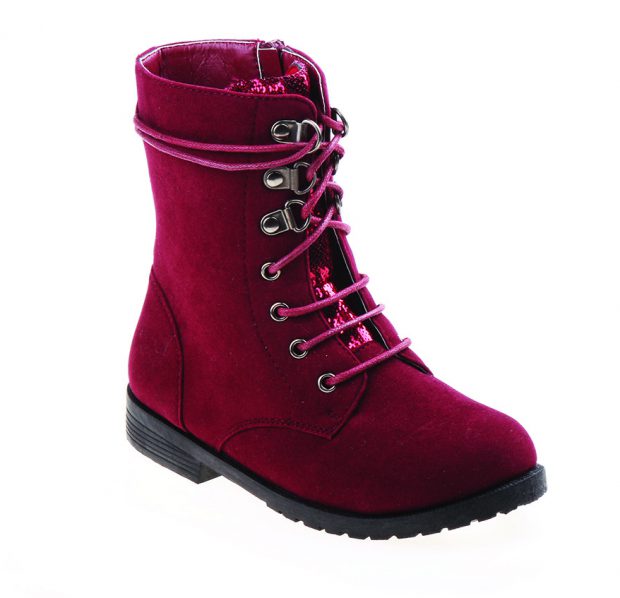 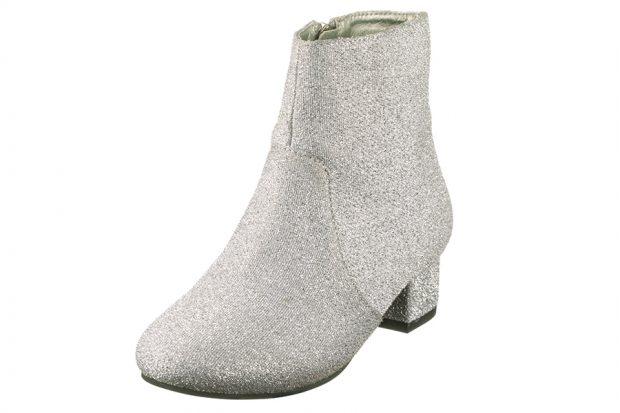 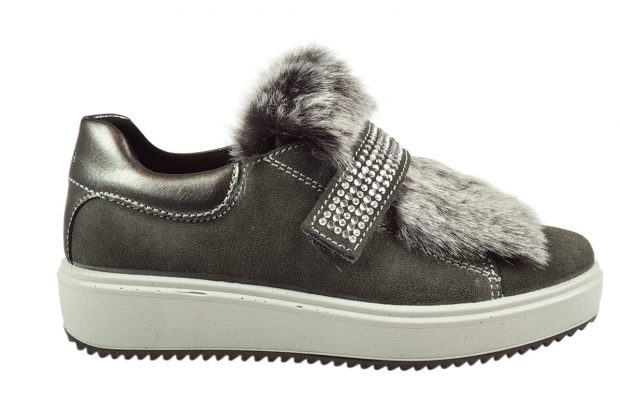 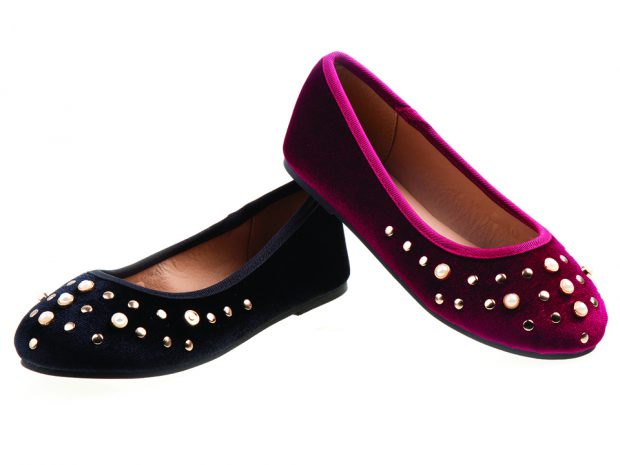 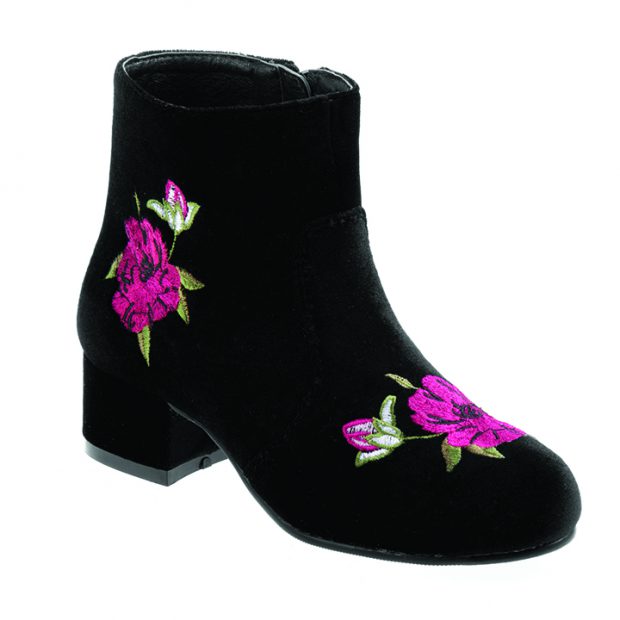